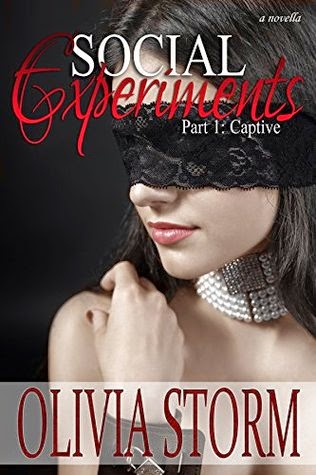 Jacob MacFadden is a man with a bright future and a single burning desire - his best friend Yvonne. Since early adolescence, Yvonne's self-destructive patterns have led her into the arms of abusive jerks but never into a relationship with the man who cares for her most. And since Jacob has mended her broken hearts since high school, the time has come for a change. Convinced he can sculpt Yvonne into a wiser woman, Jacob throws everything on the line to forge his masterpiece.

Abduction is only the first step. It's time to do things his way. Social Experiments is a twisted glimpse into obsession as a man takes extraordinary measures to save the woman he loves.

I was given this book for a honest review and I honestly can say that I loved this book from the beginning to the end of the book. In the book yes, there is a lot of dark places in the book and if you are not into really dark books then this would not be a book for you to be reading. Jake is in love with Yvonne for 10 years, which he was not able to act on them till it was to hard for him. The means that he acts on his feelings to Yvonne is something you would not think about a person would do. I did not see at first half of the things that he ends up doing to her but he went with what he thought was the best at the time to be able to get her attention for him. Yes, he ends up making lots of lies in the book to other people but he wanted her to himself and could not have anyone else take her from him or tell anyone what was going on or where she was really at. But it is bad when the lie starts to come so easy to him that people are believing it is all the truth. Yes, she did not in the book live a great time and that would make it easier for the person to lie. It is hard when the girl you love will not give you the time or day and keeps going out with other people. I think that this book was able to capture me so fast because it showed the emotions that the main character was going through and what he had to do to get the girls attention. I can not wait to see what he ends up doing in the second book when it continues where it is left off. I want to see what he ends up doing and how he ends up finally deciding on the best thing that could benefit both of them. I want to see what she ends up doing and if she keeps her promise to him that she will not run off and tell anyone what has happened in the time she had "gone away." This was a great book and ended right at the right spot. Great writing and great job on the book!