Ghost of a Promise by Kelly Moran 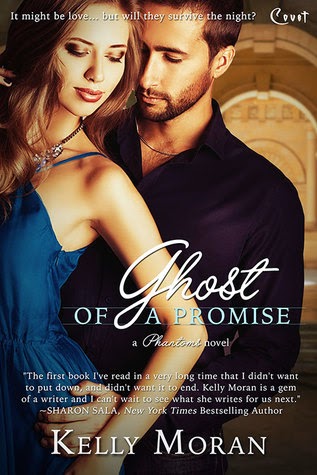 It might be love…but will they survive the night?

The ghosts of her family's estate on the coast of Maine never troubled Ava Trumble. When she finally inherits the historic mansion, however, there's a small string attached: Ava has exactly one year to solve a 200-year-old mystery of a missing girl, or lose her family's home...

The lead investigator for paranormal TV showPhantoms, Jackson Granger, is prepared for any metaphysical encounter—until now. It's not just the uncanny sense of "coming home" or even his reaction to the fiery redhead who seems to consume his every waking thought. No, it's that the ghosts are using Jackson and Ava's attraction to play out a centuries-old tragedy. Heartbreak. Loss. Overwhelming passion. Now Jackson and Ava must determine if they're sharing something real...or if they've been possessed by a love that never died.
******
I received an ARC of this in exchange for an honest review.


Paranormal romance takes on a whole new level. It's not the typical girl or guy falls for a paranormal creature. You've got Ava who just inherited her family mansion for a year. Yes, only a year unless she can solve the 200 year old mystery that has the mansion haunted. Then you've got Jackson, your new book boyfriend. He's the lead star of the TV show Phantoms, a ghost hunting show, whose come to the mansion to help Ava solve the mystery. Jackson has a connection to the mansion of his own as well as to Ava.

Ava and Jackson have a strong romantic connection but the house doesn't like it. Ava has her own insecurities that stem from the house dealing with men. The best way to describe Jackson is he doesn't care he wants that romance with Ava.

The paranormal aspects and Jacksons team from Phantoms doing their work with equipment you see on TV shows like the books ghost hunting show make the book stem to life. I mean a creepy life. I found myself unable to read much at night because I got so wrapped into the book that the little noise or movement in my house made me freak out. Kelly really did her research and brought so much realism to the novel you'll forget your reading and just may get creeped out as well.


Can Ava solve her mystery? Will Ava and Jackson pursue their connection? If so, will the house let Ava and Jackson be a couple? Well, you'll just have to read the book to find out.