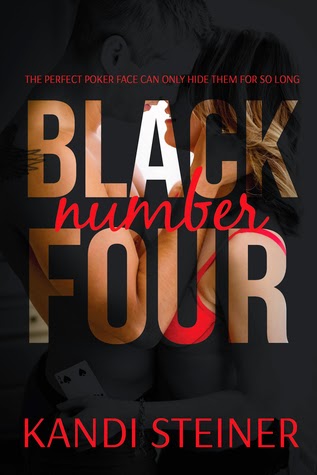 Black Number Four by Kandi Steiner
April 4, 2015
Known as one of the youngest and most ambitious poker players in the country, Skyler Thorne has a reputation to uphold in Vegas this year. Her sole focus for spring semester is to perfect her game and get tournament ready – and have some fun with her sorority sisters, of course. Meeting a care-free pledge with incredible arms adds a whole new element of fun to her semester, but when a shocking discovery about his past surfaces, Skyler finds herself stuck in a game she wasn’t prepared to play.

Kip Jackson is on a mission from his father. His plan was to get in, have a little fun, and then get out – on to bigger and better things. A feisty girl with bright blue eyes wasn’t on his list of things to do, but she quickly moves her way up to the very top. When he realizes completing his dad’s mission means crushing her in the process, he must decide if his dreams are worth the risk – or if he even has the same dreams, at all.

When the cards are on the table, will anyone be left standing?

The perfect poker face can only hide them for so
***************
I don't even know where to begin. Kandi Steiner is amazingly talented author. She grabs you from page 1 and takes you on a the poker tournament of your life.

Skyler is such a relatable character, except maybe the professional poker player part. She's going through college at Palm South without a clue as to what her major is going to be. She's playing poker with one goal..to win the Vegas tournament so her parents can be set for life and she can pay off college.

Kip is well the boy you're going to drool over and dream about. The hot nerd whose geeky glasses are going to pull you in. He's going to Palm South to fulfill his dad's dream and then in turn be able to afford to his own dream of going to UCLA. His dad wants him to get to know the hot young poker player taking the poker world by storm and beat them at the Vegas tournament. That poker player being.....Skyler.

They have so much chemistry you'll feel the sparks flying. Kip and Skyler are the perfect "pair" but can their "pair" beat all the "royal flushes" (secrets and twist) that are thrown their way??? You'll just have to read to find out.