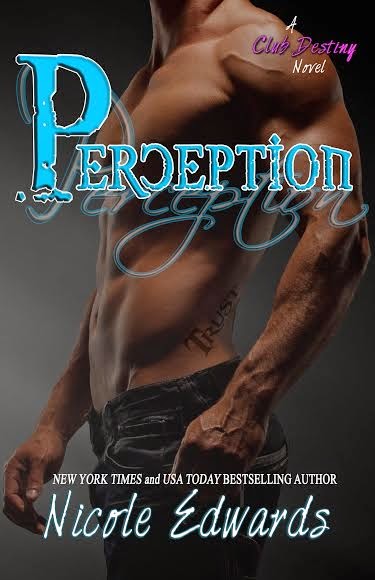 
Xander and Mercedes both know firsthand what it feels like to be in total control. The question is... who really holds all of the power?

Xander Boone has never had a problem going after what he wants. In fact, he has built his life around doing just that. And he has a rather impressive track record. But Xander finds himself up against his biggest challenge yet. As fate would have it, Xander’s greatest desire is a woman who has always been off limits to him. One he wants more than his next breath. Nothing about her is easy, but then again, things that are worth it never are. So, when the perfect opportunity presents itself, Xander knows it’s time to call in a favor. Mercedes Bryant believes there is only one way to do something. She also knows what Xander wants isn’t possible. But she‘s about to learn that you shouldn’t always believe what you think you see. And Xander is going to be the one to teach her that lesson.

As always, I love the details that Nicole puts into all her characters. You can truly picture them in your head as who you would want to play them in a movie or just whoever. Xander and Mercedes are by my favorite couple from all the books. Xander has all the right qualities for his character- successful, persistent, kind, well-dress and of course DOMINANT. Then you have Mercedes who was as well successful, gave off the dominant side but she was a little "insecure" with herself and maybe a bit broken from her past. That doesn't mean it stopped Xander. I fully believe that would be something that drove him more to her.

The dynamics between Mercedes and Xander were amazing. I loved how realistic they were. In every day normal life I've seen to dominant personalities get together but not without butting heads or pushing buttons. It's only thing I hate about some books, two people of the same personality don't always just mesh together.

Like I stated before Nicole did it again wrote a novel that has you on the edge of your seat with the pages burning between your fingers, or in my case the tablet burning under my fingers.

I was gifted this book from Teresa Mummert, herself, because my preorder fell through and it came out the day my son had open heart surgery. I was disappointed when I saw my preorder hadn't worked. I was sitting in the waiting room while my son was already taken back for his surgery. I had it planned to spend the 4-6 hours of estimated wait for my son's surgery reading Pretty Little Things. So, when I discovered my preorder hadn't gone through I was upset. Then, Teresa saw me entering a giveaway for it, explaining why I wanted it not just because it was a book I had been wanting to read but also for the distraction of the negative thoughts that would go through my head waiting for my son during his surgery. I was very, very happy when she messaged me for my email address so I could have this book.

I hooked from page one with this book. If it weren't for my son's open heart surgery I fully believe I would have read this whole book in one day. I absolutely loved it. Collin and Annie's relationship from their past to present you could really feel as you were reading it. One of my absolute favorite things was how each chapter was either Annie's or Collin's (and Jacob's a couple times) perspectives. I absolutely love it when books do that. You really, truly then get the idea of what it is like in each of their heads. I loved even more how Annie's chapters were labelled as Annie (present day) or Annabel (the girl from their past).

You could see them both running from their attraction to each other simply based on their past. At points, I wanted to scream at the book "OPEN YOUR EYES ANNIE, COLLIN LOVES YOU" but I didn't. I loved being able to get a feel of their past when they slept and dreamt about it. It was definitely a twist I never thought of for a story. The strength Collin and Annie have from that is very well defined in the book.

You really got a feel that Collin was this protective, asshole to Annie- afraid to let his true self out around her. You also saw he used women to let his "frustration" out. Annie was very well defined as a rebel. She did anything and everything she could to see how far she could push Collin. The fear they lived with daily was also very well captured.

I truly, really, LOVED this book. I am very thankful that Teresa made sure I had it.