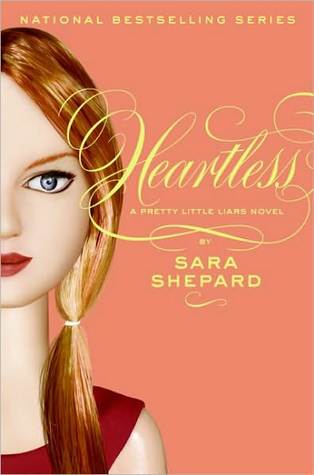 Heartless by Sara Shepard
Paperback, 304 pages
HarperCollins Publishers
June 2010
Four gorgeous girls are telling very ugly stories.
First Emily, Aria, Hanna and Spencer claimed they found a dead body in the woods behind Spencer's house, only to have it vanish without a trace. Then, when the same woods went up in flames' they swore they saw someone who's supposed to be dead rise from the ashes. And even after all that, the pretty little liars are still playing with fire. Call me heartless, but it's about time someone shut these liars up for good. After all, nobody likes a girl who cries wolf--least of all me...
-A
------------------------------------------------------------------------------------------------------------
This book was not as intense as the other 3 before it. It kind had the speed of book 2 brought back. It was all four the girls stories taking place but yet they didn't seem to be going anywhere.
You do learn new things toward the whole case but it takes almost the whole book just build up to that. I was still able to read the book in a day but it truthfully felt a little boring up until the end.
I think the only thing that kept me going was wanting to know the truth.
The girls end up getting the nickname "Pretty Little Liars" by all of the world. I did enjoy how they finally tied in the series name to the stories. I am still left confused as to who really killed Ali, is the dead really Ali's, and who the hell is A. Yes, they claim at the end to have found the REAL killer and this person is the new A but I don't for one second believe it.
I guess now I will have to read the last and latest book in the series just to find out.