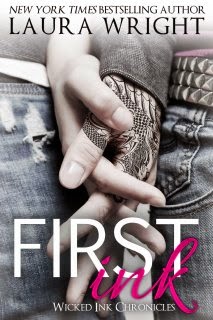 Rush
Women in his bed, celebs and rockers in his chair and a killer bank account at his disposal, life is pretty freaking swell. Then she walks back into it again. With her mismatched eyes, perfect pink mouth and a laugh that still haunts him, she gave him nothing but marvelous misery. Now she wants his hands on her again. Not for pleasure, but for pain. For Ink. A bleeding heart to match the one she left him with five years ago.

Addison
She can’t forget him. No matter how hard she’s tried. The pain she caused him in the past eats at her daily, and she can’t move on with her life. But she has a plan, a hope for redemption – a way for him to take his revenge out on her flesh. But it’ll only work if he lets her inside his exclusive world, under his famous artist’s needle and into his bed—and heart-once again.

Rush and Addison really drew me in from page one. I had to know the connection between them. I had to know what was going to happen next. I was disappointed it was a very short story. I felt Laura could have gone so much farther with it and really had more pages. Being it was only about 67 pages long makes it rather difficult to write a long review without spoiling any of it.

With the past that Rush and Addison had and for her to trust him to create and tattoo whatever he wanted where ever he wanted was incredibly brave. I don't think I could do that, no matter how I felt towards the person. However, for Addison it allowed you to see how much her heart still craved Rush.

I am already reading the sequel Shattered Ink and hope to finish it tonight. I look forward to seeing their adventure continue, even if the books are under 100 pages.