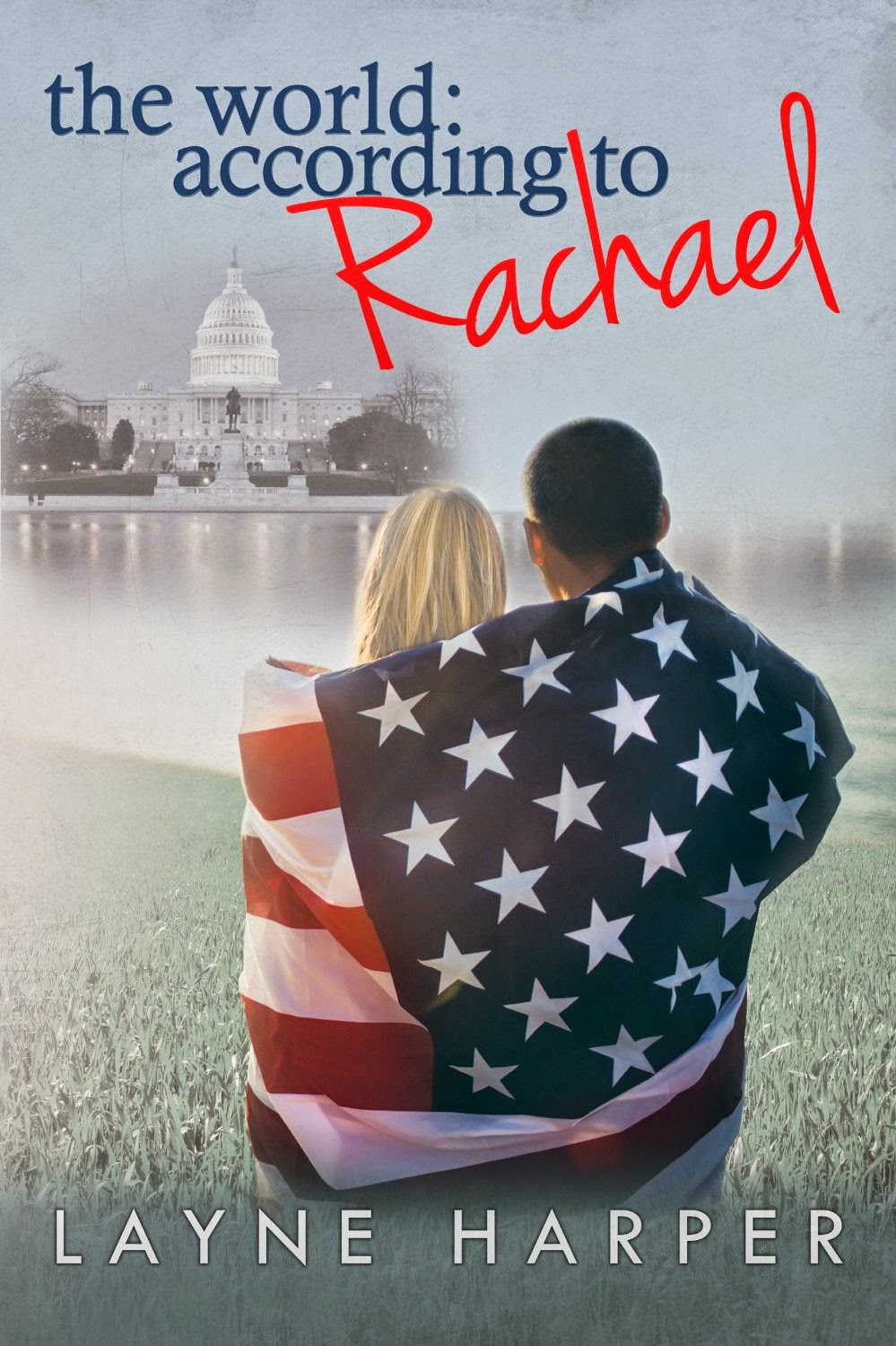 The World: According to Rachel
by: Layne Harper
Self Published
Release Date: November 25, 2014
280 pages
Kindle Edition

A heartbeat away from the President is where White House Chief of Staff Rachael Early spends almost every waking minute of every day. She’s sacrificed everything to be in this position including her chance at love, or so she thinks. But, if you ask her, all of her dreams have come true. Graham Jackson is a teacher and coach at the President’s son’s school. Graham met Rachael when he was a staffer during the campaign – a chance meeting that Rachael does not remember. However, her rally speech inspired the next seven years of his career. They’re pushed together by the First Family. Rachael’s world shifts on its axis, and she is left to figure out her new future. What happens next is a journey of self-discovery, learning how to be a partner in a relationship, and redefining what it means to have it all.
~~~~~~~~~~~~~~~~~~~~~~~~~~~~~~~~~~~~~~~~~
Thank you Stephanie S. for guest blogging for this review!

We were introduced to Rachel in the Infinity Series. She is Charlie’s best friend. Rachel is a pixie power house, an alpha woman! She is driven and knows what she wants and will not let anything get in her way – not a man, a marriage or anything else can take her off of her path. She sets off to start her career after graduating from Texas A&M and then the Warton School of Business at Penn both with honors. She begins her career working for Senator Jones starting right alongside him as he is elected Senator and stays with him as he becomes President Jones. Her long hours and hard work pay off as she becomes the White House Chief of Staff; not only the youngest but the first female Chief of Staff. She has now reached a point where her life is going to change. In one year her job will end when the new administration comes in. She meets Graham who teaches history and lacrosse at the school the president’s son attends. Graham is not like any of the men Rachel has known.
I exit my home-away-from-home, and make my way through the White House. This is a very familiar walk for me.
“Good evening, ma’am,” Samuel says as I near the double doors he’s guarding. I like him. He’s about the size of a house, poker-faced, and does his job—well. That’s a huge positive in my eyes. Finding people who are good at what they do is a rarity.
“Samuel.” I nod in his direction as I stop in front of the entrance to the First Family’s private living quarters. “The President and First Lady are expecting me.”
“Yes, ma’am,” he confirms as he double-checks the typed list. “Just a moment. There’s another guest who’ll be here shortly.”
“Oh, okay,” I reply a bit perplexed. I’m not usually kept waiting. Glancing at my watch, I note that I’m right on time—nine o’clock.
“Hi,” a confused male voice says behind me. “Is this where I’m supposed to be? This place is a maze.”
“Graham Jackson?” Samuel asks.
“Yes,” the voice replies.
The smell of Ivory soap with a hint of woodsy cologne causes me to turn my head just enough to check out the man entering my peripheral vision.
This guy is way too pretty.
He offers me his hand when he arrives at the double doors. “Graham Jackson. I’m Drake’s lacrosse coach and history teacher.” He looks like he should be starring on some contrived soap opera instead of teaching and coaching high school kids. He’s wearing dark jeans that appear to have been painted on his body. I might actually see the outline of his thigh muscles. His white, tucked-in Brooks Brothers polo accentuates his dark olive complexion. His wavy mahogany hair falls nicely against his prominent cheekbones, and shows off his strong jaw. He’s maybe in his early thirties, or he could be in his late twenties.
But then he smiles. His clear blue eyes light up, and one single dimple appears under his right eye. Is this guy for real? Something that I’ve learned in my thirty-eight years on this planet is if they’re pretty, they’re either gay or way too high maintenance for my taste.
“Rachael Early, White House Chief of Staff,” I reply as I shake his hand. I bet all his female students have had at least one wet dream starring their history teacher.
“I know,” he says with a shy smile and a dip of his chin. “I watch and read the news. You’re better looking in person.”
For some reason, I find his comment, or maybe it’s how he delivers it, disarming, and I laugh. “Usually, I hear, ‘I thought you were taller.’ I’ll definitely take better looking.”
And so it begins…..Rachel and Graham have amazing chemistry. Graham is sexy, confident, charming, sweet and very naughty. He wants it all with her. Rachel finds she can’t be with Graham the way she has been with other men (physical release only). She starts to question herself and her decisions. Were her sacrifices worth it?
So life gets all in the way! We get to see glimpses of Colin & Charlie and even Aiden! My heart was in my throat in the last chapter! I was yelling at my Kindle!
And so now I must wait….for Graham’s story…..

Rating: 5/5 Stars
You don’t have to read the Infinity Series to read this book but I would suggest reading it at some point.
http://www.layneharper.com
Facebook: Layne Harper-Author


https://twitter.com/Layne_Harper
Posted by Unknown at 11:00 AM