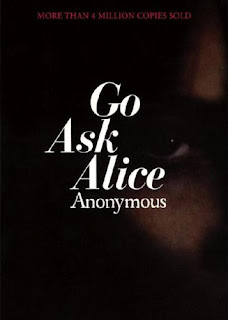 GO ASK ALICE by Anonymous
Paperback, 244 pages
Simon & Schuster Children's Publishing
December 2005
First edition publication date is March 1971
January 24th
After you've had it, there isn't even life without drugs....
It started when she was served a soft drink laced with LSD in a dangerous party game. Within months, she was hooked, trapped in a downward spiral that took her from her comfortable home and loving family to the mean streets of an unforgiving city. It was a journey that would rob her of her innocence, her youth--and ultimately her life.
Read her diary.
Enter her world.
You will never forget her.
-------------------------------------------------------------------------------------------------
WARNING THERE IS NO WAY TO WRITE THIS REVIEW WITHOUT REVEALING PARTS OF THE BOOK. I DON'T CALL THEM SPOILERS FOR THIS BOOK JUST BECAUSE I DON'T SEE THEM AS THAT.
-------------------------------------------------------------------------------------------------
This book was a very emotional book. Now when I say emotional I don't necessarily mean you will be in tears, I mean you can feel the emotion of the girl writing the entries. From her first entry to her last you feel all her emotions. It could be, because you are essentially inside her mind with her diary.
This book will piss you off, make you happy, make you sad, make you depressed, and if you have ever lost a loved on you, you may even cry.
The girl goes from being hooked on drugs to sobering up. And then she gets hooked again and sobers up again. When she finally decided to sober up for the last time (at least mentioned in the book) she is constantly picked on by all "druggy" kids at her school. They keep telling her that she will be back. They went to all means to prove to her that she will be back. When I say they went to all means I mean she was babysitting when she received some chocolate covered peanuts. She thought these peanuts were from the parents of the kids she was watching. It turned out that they were laced with acid. She was then freaking out so bad because of the worms eating her(This happens after her grandparents die. The worms are maggots. She goes into a detailed gorey account of what she thinks happens to her grandparents after they are buried). She was then sent to a hospital because she tore off her skin and pulled out massive amounts of hair. You then find out that two druggy girls were the ones who gave her the laced peanuts and they told the cops she was trying to sell them drugs which landed her in a mental hospital.
That really pissed me off. I was furious at what those girls had done. This girl, writing the diary, had been sober for about 6 months and these two druggies decided to mess all that up.
I am going to a guess and assume that after she decided not keep a diary anymore she got hooked back on drugs again. I take this because the very last part of the book states that 3 weeks later her parents came home and found her dead because of an overdose.
Overall, if this wasn't so raunchy and explicit I could see it definitely turning into a reading requirement for graduating. I fully believe that every kid should read this book. It will really open your eyes up to what that world is like. I say this too even though it is a fictional version of this girls diary it is still true in some area's. One of the first pages has an editors note that tells you this:

"Go Ask Alice is based on the actual diary of a fifteen-year-old drug user. It is not a definitive statement on the middle-class, teenage drug world. It does not offer any solutions. It is, however, a highly personal and specific chronicle. As such, we hope it will provide insights into the increasingly complicated world in which we live. Names, dates, places and certain events have been changed in accordance with the wishes of those concerned."

I FULLY recommend this book to anyone to read.